You are sluggish, sleepy and unable to control a vehicle. Strong effects can last for 24 hours.

You are a deadly driver, likely to suffer from hallucinations, delusions, dizziness, nausea, blurred vision, poor control and confused thinking.

Amphetamines make you over-excited, restless and lead to risk taking. You may experience strong emotions like fear, panic and aggression. You may get dizzy, or collapse. The effects can last more than 4 hours.

You'll probably think you're the best driver on the road? But you are erratic, likely to take risks, suffer from paranoia, and even hallucinate. Combining cocaine and alcohol is lethal. Intense effects of cocaine last about an hour, but after-effects can last much longer.

Your reaction times are slowed after just one drink. You can't judge speed or distances, you're over-confident and you make bad decisions. It's impossible to calculate exactly how much alcohol is in your system or whether you're over the drink-drive limit. Don't believe anyone who says it's fine to drive after one or two drinks.

PINTS OF BEER OR CIDER

Average strength beers and ciders like Fosters and Guinness are 2 hour pints. Each pint takes at least 2 hours to leave your blood stream from when you stop drinking.

Stronger beers and ciders like Stella, Kronenberg and Strongbow are 3 hour pints. Each pint takes at least 3 hours to leave your blood stream.

Drink 4 pints of Stella and you can't drive for at least 13 hours from finishing your last pint. If you finish at midnight, you aren't safe until after 1pm the next day.

a large Stella or Newcastle Brown Ale in a 550ml bottle is a 3 hour bottle. Drink 5 bottles and you can't drive for at least 16 hours. That's 4pm the following day if you finish drinking at midnight.
275ml? 330ml alcopops

A standard Bacardi Breezer or Vodka Ice is a 2 hour drink. But bear in mind, it's easy to drink a lot because they taste sugary,

CANS OF BEER OR CIDER

You can see why they have the reputation of being the favoured tipple of alcoholics. Cans such as Special Brew, Tennent's Super and Strongbow Super can be TWICE as strong as a Fosters? A whopping 7.5-9%. A 7.5% can is a 3.5 hour drink. A 9% can is a 4 hour drink.
Drink 5 super-strength cans and you can't drive for about 21 hours - almost a full day later. 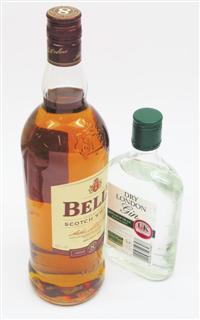 it doesn't matter what mixer you use. The alcohol takes the same amount of time to leave your system whether your vodka's just on ice or in a large glass of orange juice.
Pub measures vary. 25ml (one unit) used to be standard, but 35ml is now more common. A 25ml shot is a 1 hour drink. A 35ml shot is 1.5 hour drink. A70ml double is a 3 hour drink? The same as a pint of Stella.
Drink four 70ml doubles and you can't drive for 13 hours? That's 1pm the next day if you drank your last double at midnight.

If you are pouring spirits yourself at a party, you'll probably pour generous doubles, triples or more. Take this into account when calculating your hours.

it takes exactly the same amount of time for women to lose alcohol from their blood stream as men. Their livers work at the same speed.

KNOW when you are next planning to drive. If it's the next day, calculate the maximum you can drink using this guide and stay well under this.

KNOW what you are drinking. If you drink a weird cocktail your mate's invented with two doubles in it, it will take you at least seven hours more to sober up. That's a big forfeit.

AVOID unknown drinks altogether. It keeps you in control; it's usually cheaper, and helps you avoid a killer hangover.

It's not just the amount of alcohol, or types of drugs you take. It's whether you drink or take drugs at all and drive.

Even one beer or one spliff makes your driving worse. They slow reaction times and make it easier for you to make bad decisions that could cost your life or someone else's. At the very least, driving drunk or on drugs makes you an idiot and could get you sent to prison. It won't gain you respect. You risk losing friends, your licence, and reduce your chances of getting a decent job.

many people think the police check for alcohol but not drugs. Wrong. Roadside tests by police include examining your eyes and observing your ability to follow instructions. The tests are effective at identifying if you have taken drugs. Very soon, perhaps by the time you read this, the police will introduce roadside saliva tests too.

If you don't drive sober, you could go to prison for 14 years for the offence of causing death by careless driving under the influence of alcohol or drugs. Even if you don't kill someone, but you are caught, you face six months in prison, at least a 2 year ban and an unlimited fine. And if you think you won't get caught, think again. More than half a million breath tests are carried out each year.

it takes longer than you think for alcohol to leave your blood stream. Drugs can stay in your system for days. Cannabis can be detected by police up to four weeks after you smoked it.

3,000 people are killed and seriously maimed every year in the UK by drunk drivers. That's 58 a week. People who drive at twice the legal alcohol level are at least 50 times more likely to be involved in a fatal car crash. Postmortems on dead UK drivers show that 1 in 6 had illegal drugs in their system when they crashed.

It's all about timing

nearly 1 in 6 convicted drink-drivers are caught the morning after drinking. How much have you drunk, when did you stop drinking, and when do you plan to drive? It's not just about being under the limit, it's about being alcohol free. Even small amounts of alcohol affect your reaction times.
These pages explain how to calculate how long it takes to be alcohol free

You can use it when out drinking, as long as you know how much you drink and how strong it is. If you're drinking out of cans or bottles, these things are printed on the container by law. You don't have to learn all the times for all the drinks? Just the ones that you drink.

it takes about 1 hour for your body to rid itself of each unit of alcohol, but it can take much longer. It depends on factors including how healthy you are and how much you've eaten. Eating a big meal means alcohol is absorbed more slowly - so it takes longer to sober up.

Take a mobile in your vehicle in case of emergencies. But never use it while driving. Not even a hands-free phone. It's the distraction of the call that's dangerous. It takes your mind off the road. It's even more insane to text, or use pagers, while driving.

Switch your phone to voice mail and turn it off. Put it out of reach so you won't be tempted to pick it up.

Don't let noisy or drunk passengers distract you from the road either. If they can't be quiet and sit still they don't deserve a lift. It's their lives at stake as well as yours. Tell them to keep it down, you need to concentrate.

If you are caught using a hand-held mobile phone while you are driving, you’ll get an automatic fixed penalty of £60 plus 3 points on your licence. If your case goes to court, you may face disqualification on top of a maximum fine of £1,000.