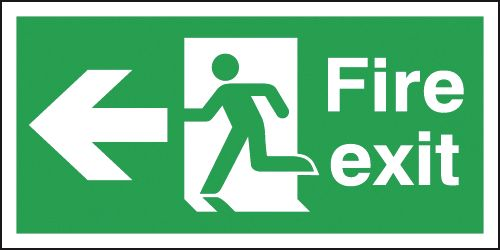 This section provides guidance on the general principles that apply to escape routes. The guidance is based on premises of normal risk so if your premises (or part of your premises) are higher (or lower) risk you should adapt the solution accordingly. The following information may give you guidance on complying with Article 14 of the Regulatory Reform (Fire Safety) Order 2005. It is without prejudice to anything which may be required by an enforcing authority.

You are not obliged to adopt any particular solution for escape routes in this section if you prefer to meet the relevant requirement in some other way. If you decide to adopt some alternative arrangement it will need to achieve at least an equivalent level of fire safety.

Once a fire has started, been detected and a warning given, everyone in your premises should be able to escape to a place of total safety unaided and without the help of the fire and rescue service. However, some people with disabilities and others with special needs may require help and assistance from staff that will need to be designated for the purpose.
Escape routes should be designed to ensure, as far as possible, that any person confronted by fire anywhere in the building, should be able to turn away from it and escape to a place of reasonable safety, e.g. a protected stairway. From there they will be able to go directly to a place of total safety away from the building.

The level of fire protection that should be given to escape routes will vary depending on the level of risk of fire within the premises and other related factors. Generally, premises that are simple, consisting of a single storey, will require fairly simple measures to protect the escape routes, compared to a large multi-storey building, which would require a more complex and inter-related system of fire precautions.

When determining whether your premises have adequate escape routes, you need to consider a number of factors, including:

The Type and Number of People Using the Premises

The people present in your premises will sometimes just be employees, but most of the time will be a mixture of employees and members of the public. Employees are reasonably expected to have an understanding of the layout of the premises, while members of the public will be unlikely to have knowledge of alternative escape routes.

The number and capability of people present will influence your assessment of the escape routes. You must ensure that your existing escape routes are sufficient and capable of safely evacuating all the people likely to use your premises at any time, including events such as sales. If necessary you may need either to increase the capacity of the escape routes or restrict the number of people in the premises.

In the event of a fire, it is important to evacuate people as quickly as possible from the premises. Escape routes in a building should be designed so that people can escape quickly enough to ensure they are not placed in any danger from fire. The time available will depend on a number of factors, including how quickly the fire is detected and the alarm raised, the number of escape routes available, the nature of the occupants and the speed of fire growth.

The Age and Construction of The Premises

Older buildings may comprise of different construction materials from newer buildings, and may be in a poorer state of repair. The materials from which your premises are constructed and the quality of building work and state of repair could contribute to the speed with which any fire may spread, and potentially affect the escape routes the occupants will need to use. A fire starting in a building constructed mainly from combustible material will spread faster than one where fire-resisting construction materials have been used.

If you wish to construct internal partitions or walls in your premises, perhaps to create a sales area or to divide up an office area, you should ensure that any new partition or wall does not obstruct any escape routes or fire exits, extend travel distances or reduce the sound levels of the fire alarm system. Any walls that affect the means of escape should be constructed of appropriate material.

Depending on the findings of your fire risk assessment, it may be necessary to protect the escape routes against fire and smoke by upgrading the construction of the floors, ceiling and walls to a fire-resisting standard. You should avoid having combustible wall and ceiling linings in your escape routes. You may need to seek advice from a competent person. Any structural alterations may require building regulation approval.

The Number of Escape Routes and Exits

In general there should normally be at least two escape routes from all parts of the premises but a single escape route may be acceptable in some circumstances (e.g. part of your premises accommodating less than 60 people or where travel distances are limited).

When evaluating escape routes, you may need to build in a safety factor by discounting the largest exit from your escape plan, and then determine whether the remaining escape routes from a room, floor or building will be sufficient to evacuate all the occupants within a reasonable time. Escape routes that provide escape in a single direction only may need additional fire precautions to be regarded as adequate.

Exit doors on escape routes and final exit doors should normally open in the direction of travel, and be quickly and easily openable without the need for a key. Checks should be made to ensure final exits are wide enough to accommodate the number of people who may use the escape routes they serve.

Corridors and stairways that form part of escape routes should be kept clear and hazard free at all times. Items that may be a source of fuel or pose an ignition risk should not normally be located on any corridor or stairway that will be used as an escape route.

The means of escape you provide must be suitable for the evacuation of everyone likely to be in your premises. This may require additional planning and allocation of staff roles – with appropriate training. Provisions for the emergency evacuation of disabled persons may include:

Use of these facilities will need to be linked to effective management arrangements as part of your emergency plan. The plan should not rely on fire and rescue service involvement for it to be effective.